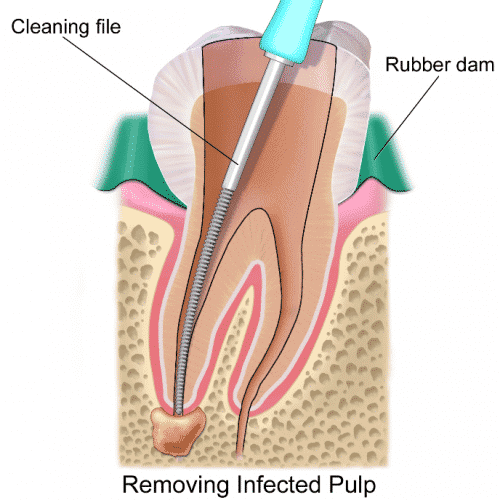 Want to strike fear into the heart of a dental patient? Try mentioning the term “root canal”. No other dental treatment has gained as much negative notoriety, not even dental extractions. However, advancements in dentistry and new technology have made the root canal (endodontic treatment) a safe and relatively painless procedure.

As a Wisconsin general dentist who happens to perform most of his patients’ endodontics himself, Dr. Brusky is no stranger to the root canal procedure. According to him, the worst part of a root canal is the anticipation of what’s to come.

“Some patients, when they hear the term root canal, turn white and begin to consider all the worst-case scenarios,” says Dr. Brusky. “It’s really just a fear of the unknown.”

The following is what patients can expect during a standard root canal treatment. Dr. Brusky hopes that by making this information available, patients will begin to see root canals as a dental treatment, not unlike any other.

As far as the negative myths surrounding endodontics, Dr. Brusky hopes that an important fact about root canals takes hold instead: Root canals don’t cause pain; they relieve it.

What is a Root Canal Exactly?

Calling the endodontic procedure a “root canal” is a bit of a misnomer. A root canal is a component of a healthy tooth. There is the enamel, the ultra-strong shield that protects the tooth, the dentin or “meat” of the tooth, the pulp chamber, and then there are the one to five root canals that house tissue: the nerve, artery, and vein that make up the root canal system, also called the tooth pulp. This system consists of the living tissue that keeps the tooth vital on the inside. And while teeth can become devitalized on the inside, the cells on the outside of the tooth on the roots remain alive to nourish the tooth and keep it secured to the jawbone.

Dr. Brusky will recommend an endodontic treatment if the pulp of your tooth has become inflamed or infected due to tooth decay, repeated dental procedures on the same tooth, or trauma such as a crack or chip. Patients suffering from severe gum disease might also develop tooth root problems, necessitating the root canal procedure.

If the inflammation or infection is left to fester, swelling can develop, which can cause the patient to feel pressure in the affected area. Next, the patient may begin to feel increasing amounts of pain, and the longer the tooth is left without treatment, the less viable the tooth will become.

Dr. Brusky warns patients that when the pain due to hot or cold temperatures begins to subside, that usually indicates that the tooth’s nerve is beginning to die. The pain could then increase as an acute and incredibly painful infection begins to spread to the surrounding areas and jaw bone.

“The key to good dentistry is to combat tooth infection at the source before it can affect the rest of a patient’s smile.”

Whatever the cause, an endodontic procedure will be necessary to save the tooth, stop the pain, and save the patient’s smile.

Dr. Brusky begins an endodontic procedure by first checking the patient’s medical history and current medication protocol to ensure both health and safety. Nervous patients may be given an oral sedative or anti-anxiety medication, which can relax the patient and make the appointment seem to breeze by.

The primary goal of endodontics is to find and remove the infected or inflamed pulp and to save and restore the tooth’s structure.

If a root canal is recommended because of a tooth fracture that has reached the pulp or is a result of gum disease, it may be more difficult (but not impossible) to restore the tooth to full health.

Step 1: After confirming the diagnosis, a local anesthetic is given to numb the affected area. Dr. Brusky will not begin treatment until the area is in fact completely anesthetized.

Step 2: A dental dam (a thin sheet of rubber or vinyl) is placed over the affected area. The sick tooth will protrude through a hole in the dam, which effectively separates it from the other healthy teeth in the mouth.

The dental dam provides a sterile environment free from the contamination by bacteria found in saliva and the rest of the mouth.

Step 3: Dr. Brusky will drill a small hole through the biting surface of the affected tooth. In some instances, he may enter the tooth from the back. The determining factor is how easily it is to get to the pulp chamber and root canals so that treatment can begin.

Step 4: Dr. Brusky will use specially designed instruments to remove the diseased and/or dead pulp tissue. During this part of the procedure, the patient shouldn’t feel anything. The area has already been numbed, and all of the matter being removed from the tooth is dead or in the process of dying. Also, once the pulp and all the nerves contained in it are removed, the tooth will no longer have the ability to feel pain to temperature or sweets.

Step 5: The root canals are disinfected with antiseptic and antibacterial solutions to keep the tooth clean and sterile.

Step 6: The root canals are shaped by Dr. Brusky using ultra-fine and flexible instruments. The drill used to do this is almost silent, which will further diminish patient apprehension. Dr. Brusky will wash and clean the root canals one more time while removing any debris that may have been left behind.

Step 7: Root canal fillings will be used to fill the cavity space. These fillings act much like rubber but are comprised of thermoplastic that is heated and then compressed into the tiny space within the tooth. An adhesive cement is then used to seal the filler inside. Once filled and sealed, the tooth is much less susceptible to infection by bacteria.

Step 8: Dr. Brusky will use a temporary or permanent filling material to seal the hole that was used to access the tooth and remove the dead matter. The dental dam will also be removed. If the tooth’s structure is compromised and the restoration will not hold on its own, Dr. Brusky may place a post made of metal in one of the canals to help with retention.

Following the procedure, Dr. Brusky may prescribe an antibiotic to halt or prevent infection. Home aftercare is minimal and lasts anywhere from a couple of days to a week. The patient may experience some discomfort following treatment, but aspirin or ibuprofen can usually be enough to halt the pain entirely. Tenderness to chewing food is typical for one to three days, and in rare cases may persist for up to 3 weeks. Avoiding chewing food on the tooth prevents this, but it also helps prevent the possibility of fracturing the tooth. Root canals eliminate the pain but do weaken teeth.

The final step of endodontic treatment is to place a permanent restoration, either a filling or crown, to replace the lost tooth structure. The restoration will also provide a complete seal over the top of the tooth. Sealing the tooth is important, as the area could become infected once more by bacteria from the mouth. Back teeth that have undergone root canal therapy are almost always crowned, while front teeth are rarely recommended for a crown after a root canal.

Dr. Brusky concludes that “Once patients know the steps I follow and are more informed about endodontics in general, the fear usually goes away, which can lead to a much less stressful appointment. In fact, some patients actually start to doze off!”

To learn more about endodontics or to schedule a root canal with Dr. David Brusky, contact The Center for Dental Excellence today.

I Want to Call You!

The Benefits of Minimally Invasive Dentistry

Why Wisdom Teeth Are Recommended for Extraction